This is an overview of the past year of projects I am now involved with and In a post last year I said this:

“Now I see people struggling and would love to find a place or set-up a place where people can come and eat and not worry about the cost but have a healthy full filling meal. Somewhere they can stay if they are homeless or struggling or just trying to get away from others and need somewhere to rest.

I have NO IDEA how this will be possible and in some following messages I will expand on my idea however I will need help, and lots of it. I have some ideas but feel that we need to work together to serve each other and help. I don’t know how this will happen but trust it will and believe it is possible. It is time to stop just existing but to do something and use those connections and see what is real or not.”

I did not know where to start with this idea, and started with the internet searching to find if there was any projects already running in the area that I could maybe help with and learned of hundreds of organisations working for various causes around where I lived that I’d never heard of and a few I’d heard of but never knew what they did.

There is a cafe I often go for lunch called Labyrinth Holistic Cafe – a nice place to go relax at lunch and disconnect from the busyness of work for 45 minutes. They do a great selection of meals, soups and many teas that I enjoy to chill with. They are also one of the only Gluten Free cafe’s locally which is a great benefit to many people.

They also started a project called “One for the Wall” where people could buy more than just their share and put it aside for when someone needed something. This was aimed to help those who were homeless or struggling but over time has morphed into a combination of a food bank and help bank sharing items from sugar and tea to clothing and pots and pans. This has been given the project name Labyrinth Appeals and now works with multiple organisation in Stockton to provide help via referrals in a cafe that means people are not often aware that people are getting help to help people with dignity and embarrassment.

I have been helping with getting some donations, promoting their project and helping with some connections and publicity. Over the last year, we have worked with fareShare (supermarkets giving food to avoid food waste) that is used to make some items in the cafe and the profits going to the food/help bank to provide items for people in need. As it was discovered, its not great giving fresh ingredients if they have no way to cook, store or prepare them.

Another project is Stockton Town Pastors (STP), they are a part of the Christian Nightlife Initiative that goes across the country and STP have been running about 7 years now. We go out on the streets on a Friday, Saturday and some holiday nights out and help people who may be a little worse off providing water & flip flops if needed and sometimes first aid or just sitting with people who may have lost friends. It is a collaboration with the night life teams including door staff, CCTV, Emergency services and volunteers. 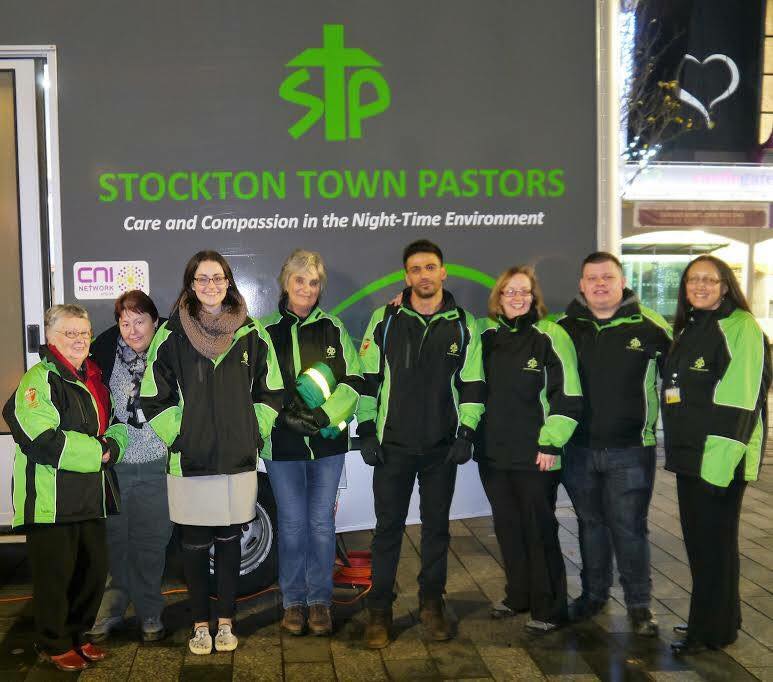 A group of volunteers outside the Stockton Town Pastors van on Stockton High Street, December 2016

I realised that while I’m out on a night myself, I’m often left in a position of helping people out/looking after them without really thinking about it. I want everyone to have a great time out but some people always seem to take it too far and not know their limits. I’d prefer they get home safe than anything happen to them. 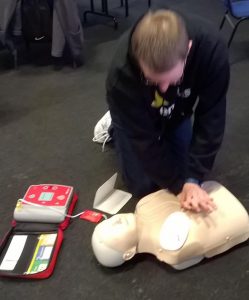 I found that my years of stewarding, looking out for dangers and general safety made me ideal for this kind of role with STP and so went out on a few patrols with them and have since been through various training including Emergency First Aid at Work, and joined with their team to go out at least once a month, and plan to be much more from May time.

The third project I am working with is was a university society named Enactus Teesside. I had heard the name before but just in passing without any idea what they did.

I think it was September 2016, where I helped with a colour run that was being run at Stuarts Park in Middlesbrough. I am part of the Voluntees network where students can volunteer for things, and they requested 4 to 8 people to throw paint over people at the colour run to represent Teesside University. I put my name down, it was a lot easier than running it. I met a group of people who also volunteered, we called ourselves the paint pirates where we got to throw orange paint (my favourite colour) over people as they ran by. 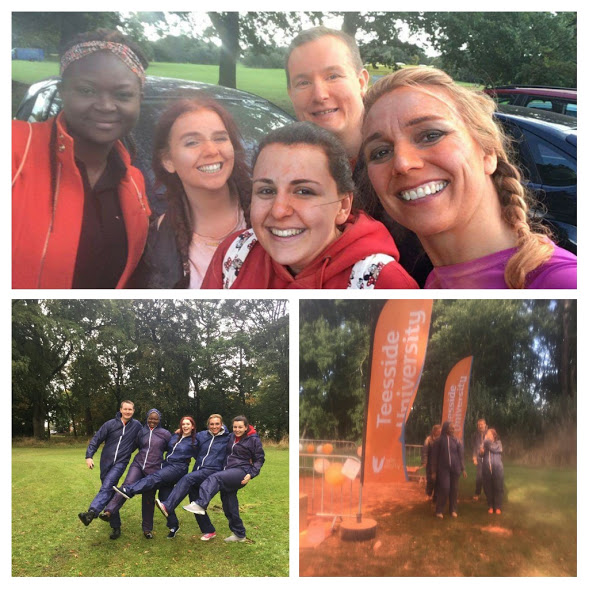 I got to speak to people in the group where two of them told me of Enactus at the university. I messaged the chair to have a chat and see how I could get involved and what it could also offer me. I found there was many networking opportunities I could go to, training and friendships. I found the group to be an academic group but one that would help people as much as they could. I initially didn’t get involved with a particular project but provided insight, and connected people to contacts they needed. People I had as friends that they were wanting to talk with, felt strange but nice at the same time to re-connect people.

I think that is something I would like to do professionally if that is something that is possible. Over my life, I work to keep in contact with people, find out what they are up to and help connect people if I feel it would benefit them both. Is this something I can be paid for? I am not sure, but can look into it in a few weeks time.

So a little about Enactus Teesside, they’ve recently been in the news about their successes at the Enactus UK Nationals this past week but to tell you in the simplest terms I can: A group of students who want to help people locally and nationally using social enterprise projects. This means to make them self sufficient and can keep on going after we have set them up and passed them on.

There are three main projects, I have been working with the international one called Save the Woman:

There is much more details on the website at where you maybe able to support or get involved with. 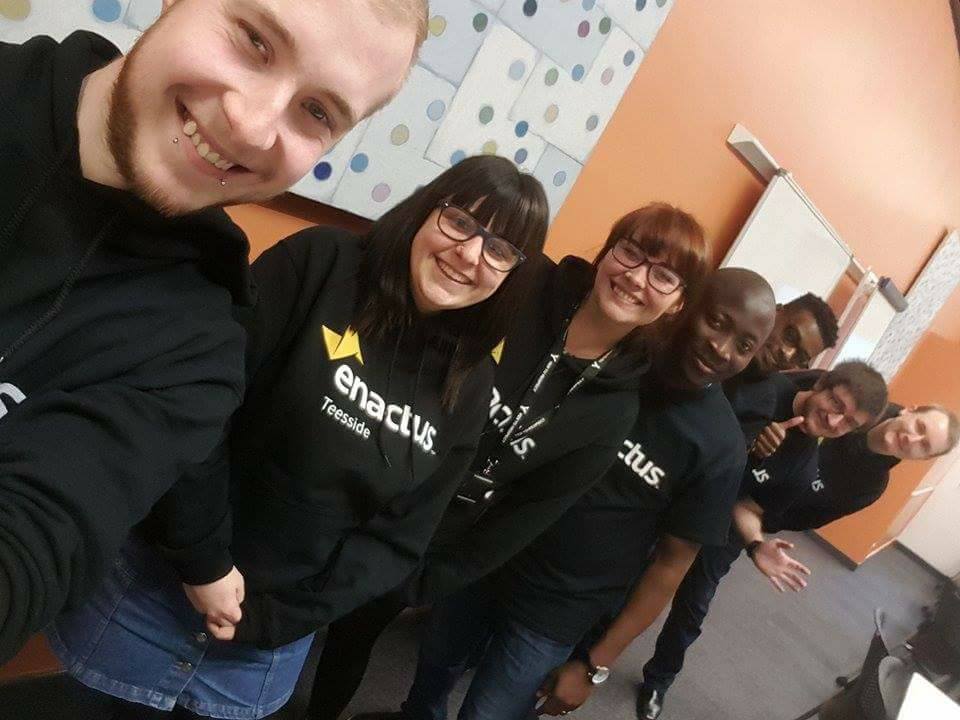 I was unable to attend the Enactus nationals competition as it was the same time as Spring Harvest this year and I’d already committed to doing that before I knew the dates but Teesside demonstrated that they are doing their projects well and the things I did in the background really did come in useful.

I plan to continue working with the above projects in the foreseeable future but believe that I can use some of the knowledge and experience to further the project in the first paragraph. I think I needed to see what was currently possible, how things were setup already before I could even contemplate how to proceed with the plans I was given. I have been very thankful to the various organisations, for their support and the opportunities they have provided.

And look forward to what is coming next.