At the moment I’m trying to use up all the stuff in my cuboards and see what I can make with the variety of ingredients I have. Many that are coming to out of date time so need to be used up.

This is my most recent thing I’ve attempted – Its not quite what the receipe said but I didn’t have everything it said so I substituted ingredients to see what would happen:

Method
Heat the milk to boil, and turn down to simmer.
Add the Flaxseed mixture and keep stiring to stop it going lumpy (apparently)
When mixed nicely, Add the sultanas and a grated apple and keep mixing.
After a minute or so, add the Honey & juice and stir
Mix in and allow to cool

I found I could eat it two ways.

1. Hot as a kind of breakfast meal with some yogurt on the top.
2. As a desert I added double cream on the top after pouring the mixture into stumpy glasses. 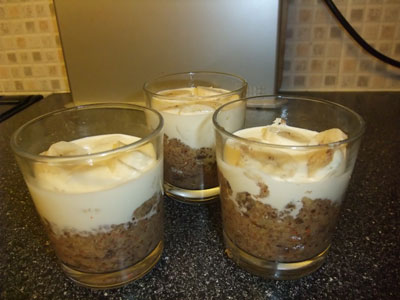 I added the banana chopped over the top of both variations

Apparently its quite healthy for you, but the taste was something strange to start with, but overall quite nice but not something I’d go out and buy the ingredients for.